The previous OCG 2019.10 was quite a diverse and healthy format. With only minor changes made to the top decks in the OCG 2020.01 Limit Regulation, many were expecting the metagame to remain relatively the same.

But the debut of Red-Eyes Dark Dragoon changed the OCG.

Compiled from a total of 408 top-placing decks from 62 competitive tournaments held in Japan, Asia, China, Korea and Vietnam, here is the final metagame breakdown of the OCG 2020.01 format.

With only a small hit to Orcust, they remained a popular choice. But the release of Girsu, the Orcust Mekk-Knight propelled them to the top.

Not only was Girsu, the Orcust Mekk-Knight a better Armageddon Knight due to the additional synergy with Orcust cards, it was also able to generate a Token, making it a 1-card starter to Galatea, the Orcust Automaton. Girsu greatly boosted the consistency of Orcust, and they became the top contender by a huge margin.

While many decks have to make adjustments against Red-Eyes Dark Dragoon, Orcust has Dingirsu, the Orcust of the Evening Star. They could answer Dragoon even before Side Decking and that was a big advantage.

The OCG 2020.04 Limit Regulation weakened Orcust by another notch as Harp Horror and Galatea took another hit. Orcust remains as the top deck, but many has switched to the Dragoon Orcust variant.

Sky Striker relied on Mystic Mine to shutdown both Dragoon and Orcust.

Nearing the end of the format, Sky Striker started adopting the Dragoon package into their build.

Although the OCG 2020.04 Limit Regulation left Sky Striker untouched, the limitation of Red-Eyes Fusion was a hit to the Dragoon Sky Striker variant. Sky Striker is still among the top contender, but has fallen quite a bit.

Altergeist had a boost from Altergeist Pookuery, but it was not until the release of Linkross that they took off.

Linkross provided them a way to trigger Altergeist Hexstia during their own turn, which in turn searches for an Altergeist card, greatly improving their consistency.

Skill Drain became one of the popular build as a method to answer Dragoon. Altergeist Marionetter and Altergeist Hexstia into Linkross allows Altergeist to consistently open with Altergeist Protocol which prevents the activated Monster Effects of their own Altergeist from being negated by Skill Drain.

At the dusk of the format, Altergeist begun running the Dragoon package in their Side Deck. 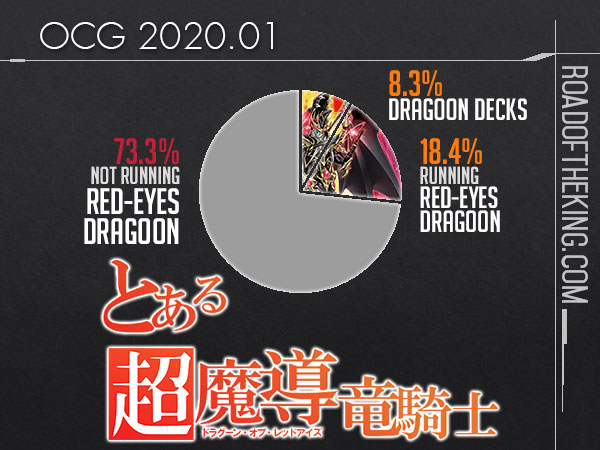 Out of all 408 decks, 34 decks were based on Red-Eyes Dark Dragoon, namely Dragoon Invoked, Dragoon Beat and Releaser Dragoon.

75 decks were running the Dragoon package (Dark Magician, Red-Eyes B. Dragon, Red-Eyes Fusion, Predaplant Verte Anaconda) in either the Main Deck or Side Deck, or using Muddy Mudragon to Special Summon Red-Eyes Dark Dragoon to complement their strategy.

Based on the numbers, it may seem that Dragoon is not quite dominating, but it had warped the metagame. Decks had to run Super Polymerization and/or Kaiju to answer Red-Eyes Dark Dragoon, or just straight up lose to it. Many decks such as Sky Striker, Altergeist, Subterror were steering towards incorporating Dragoon as it provides them with a game-winning threat. If you can’t beat them, join them.