As the World Championship 2003 was announced to be held on 10 August 2003, the Asia Championship was shifted to the start of the year.

There is a short news article by Chinese Television System (CTS) about the Asia Championship 2003.

The Asia Championship 2003, happening today in Taiwan, has over 200 experts registering to compete in the same tournament, pitting their skills against each other, and even includes national champions from Hong Kong, Singapore, Malaysia who will be launching a fierce battle.

At the Taipei Chientan Youth Activity Center, each of these individual experts are extremely focused, looking intently at their cards in hand, preparing to deal a finishing blow. The seven aces lined up, preparing to accept challenges, these seven individuals are champions from various countries, among them are Huang Peng Wei from Taiwan, and also the national champions from Hong Kong, Singapore and Malaysia, while the crowd that came to challenge them are very enthusiastic, a total of over 250 have signed up, the oldest is in their forties, and the youngest is just in Elementary Grade 3.

Everyone can choose to challenge their most admired idol, a victory in the challenge will be accumulated as points, across multiples matches, who will be able to surmount all challenges, the champion of this championship will be revealed this afternoon. This year marks the fourth anniversary of the Yu-Gi-Oh! card game, and based on today, it is showing no signs of diminishing popularity. 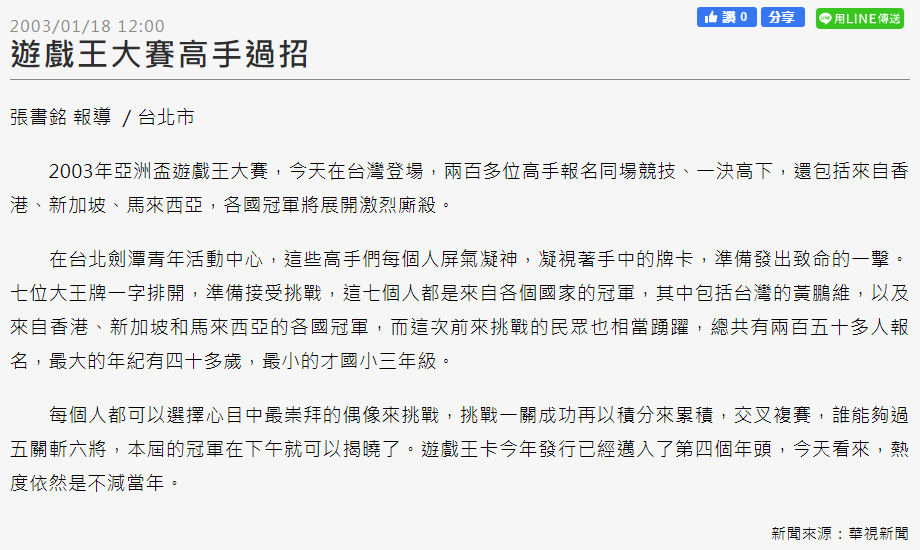