The OCG 2018.10 Limit Regulation had hit the big 3 – Sky Striker, Altergeist and Gouki – but they remained as the top contenders for another season.

The biggest change was the diversifying of the competition. Sky Striker is no longer the best performing deck and the top-cut is shared more evenly with Gouki and Altergeist among many decks.

Compiled from a total of 489 top-placing decks from 80 competitive tournaments held in Japan, China and Asia, here is the final metagame breakdown of the OCG 2018.10 format.

Sky Striker begun with an overwhelming lead, but soon declined after the release of Savage Strike.

Sky Striker Ace – Kaina was mostly a situational card and had little impact compared to the new supports that the other decks were getting.

Sky Striker grinds out the opponent by generating card advantage through Sky Striker Mobilize – Engage! and recurring it with Sky Striker Ace – Kagari. However, Pot of Extravagance gave other decks the ability to generate their own card advantage, allowing them to keep up against Sky Striker.

Having Sky Striker Ace – Kagari limited to 1 greatly crippled the deck’s ability to generate card advantage over multiple turns. Sky Striker is no longer the best deck in OCG 2019.01, but surprisingly with the aid of Pot of Avarice to recycle Kagari, the deck is still able to remain competitive.

The lost of Summon Sorceress was a huge detriment to Gouki as it struggles to go into Firewall Dragon.

Then Savage Strike gave Gouki Psychic Wheeleder, a Level 3 Psychic Tuner monster that could be Special Summoned from hand while you control a Level 3 monster. This was a huge boost to Gouki since it could be used to bring out Isolde, Two Tales of the Noble Knights (via M-X-Saber Invoker), Crystron Halqifibrax or even Cherubini, Ebon Angel of the Burning Abyss.

The flexibility of Psychic Wheeleder made it difficult to disrupt Gouki, especially with Emergency Teleport that essentially function as additional copies.

Playing against Gouki boils down to whether you draw sufficient ‘Hand Traps’ in your opening 5 cards to disrupt their combo. Else they would go into an unbreakable Extra Link board of Knightmare Link monsters with Tri-Gate Wizard and have Topologic Gumblar Dragon discard your hand.

With so many hits to Gouki, especially with Firewall Dragon gone, the Link spam variant of Gouki is no longer viable.

Altergeist was one of the biggest beneficiary of Pot of Extravagance.

Before Savage Strike, Altergeist relied on Pot of Desires for card advantage but it runs the risk of banishing Altergeist Multifaker and Altergeist Silquitous.

Pot of Extravagance is a much safer choice as Altergeist mostly needed Linkuriboh and Altergeist Hexstia, and they could counteract the drawback by running additional copies of these two cards.

With the additional cards from Pot of Extravagance, it was much easier for Altergeist to control the game with an assortment of Traps and ‘Hand Traps’.

Altergeist Multifaker took another hit and the semi-limitation of Personal Spoofing made it much harder to open with Multifaker. In OCG 2019.01, players are running Sangan with Salamangreat Almiraj as an additional method to fetch Multifaker. 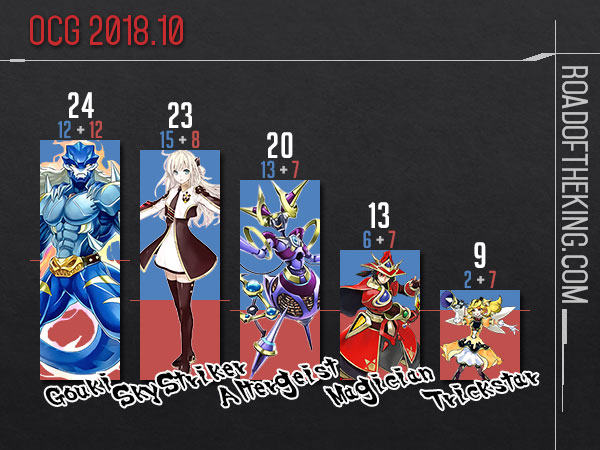 Surprisingly, Altergeist, Magician and Trickstar have almost the same amount of 1st placing that Sky Striker has in individual tournaments.