The OCG 2018.01 Limit Regulation had heavy hits to SPYRAL, effectively ending their dominance and opening up to a relatively diverse format.

Compiled from a total of 513 top-placing decks from 76 competitive tournaments held in Japan, China and Asia, here is the final metagame breakdown of the OCG 2018.01 format.

Results from the Duelist Cup 2018 Hong Kong, Malaysia, Philippines and Singapore that were not in the Weekly Reports are included in this Quarterly Report.

Magician took the top position from the start of the OCG 2018.01 format and has mostly remained at the top. Magician relies on the synergy between Heavymetalfoes Electrumite and Astrograph Sorcerer to generate card advantage while developing a strong opening board at the same time.

However, with Supreme King Dragon Darkwurm limited, the Supreme King variant is essentially dead. The current trend is to run Odd-Eyes monsters instead to continue using Odd-Eyes Revolution Dragon.

Zefra, together with Magician, has defined the early OCG 2018.01 competitive scene as the Pendulum format.

The release of Flames of Destruction propelled Plant to the forefront of the competitive scene. The Knightmare Link Monsters made the combo much more resilient, while Called by the Grave and Red Reboot stop disruptions from the opponent.

Plant is a combo deck whose main strategy to First-Turn-Kill (FTK) the opponent by looping Phoenixian Cluster Amaryllis with Topologic Bomber Dragon on the field while having 10 other Plant-Type monsters in the graveyard.

The OCG 2018.04 Limit Regulation has directly cut off the FTK combo by banning Phoenixian Cluster Amaryllis. Meanwhile, a different Plant FTK combo using Samsara Lotus and Trickstar Black Catbat has been discovered, but a consistent build has yet to see success in the competitive scene. 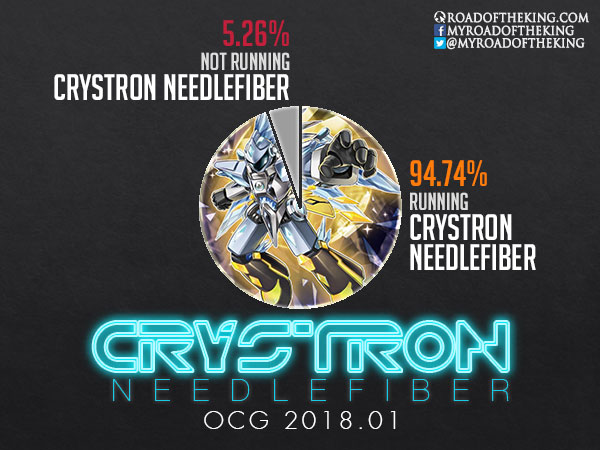 Even decks such as Trickstar that do not require Crystron Halqifibrax/strong> in their strategy, are running 1 Blackwing – Gofu the Vague Shadow and 1 Glow-up Bulb in the Main Deck to take advantage of its ability to make a powerful comeback play. Using just Blackwing – Gofu the Vague Shadow itself to Link Summon Crystron Halqifibrax is 1-card combo to bring out a Link-4 monster.

Control decks such as Altergeist and Subterror are obligated to run Crystron Halqifibrax for Ghost Reaper & Winter Cherries.