A brief history of Kanan the Swordmistress and her impact in the early OCG metagame. 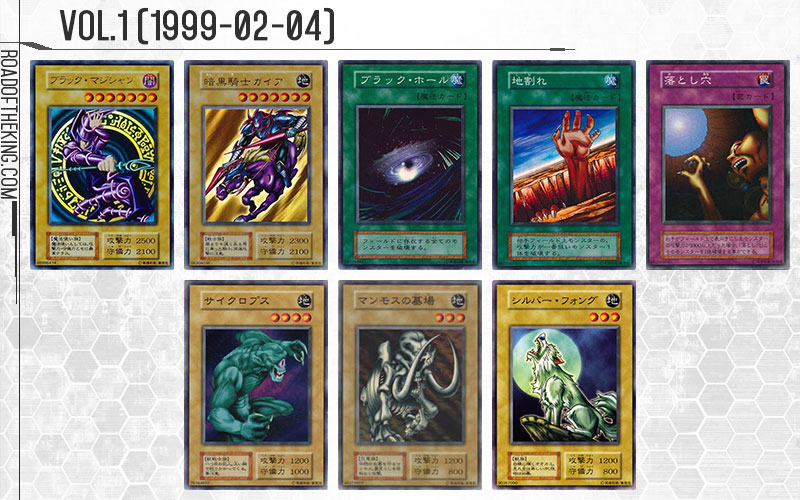 Yu-Gi-Oh! OCG begun with Vol.1 on 4 February 1999, and the first rule set used was the “Official Rules” (公式ルール). The “Official Rules” plays similar to the Duelist Kingdom arc, high level monsters can be summoned directly without Tributes, and only 1 Spell/Trap card can be activated each turn.

Under the “Official Rules”, monsters with high ATK such as Dark Magician and Gaia The Fierce Knight will dominate the board, while Spell/Trap like Dark Hole, Fissure and Trap Hole are for clearing those monsters.

After Dark Magician and Gaia The Fierce Knight, there is a huge power gap as the ATK drops to a mere 1200 for Hitotsu-Me Giant, Mammoth Graveyard and Silver Fang. 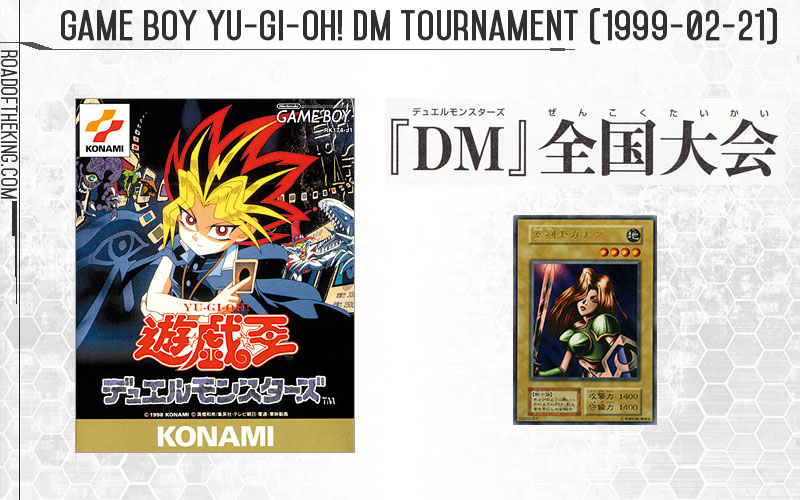 Shortly after, the Game Boy Yu-Gi-Oh! Duel Monsters National Tournament was held on 21 February 1999. Attendees of this tournament received a copy of Kanan the Swordmistress.

With ATK 1400, Kanan the Swordmistress had the third highest ATK of all monsters released up till this point.

Booster 1 arrived on 1 March 1999, but it was very underwhelming. Ryu-Kishin and Wattkid had the highest ATK of the whole set, but it was a meagre 1000.

The release of Starter Box in March was a major game-changer. Blue-Eyes White Dragon took the top spot of the highest ATK, while Raigeki was just outright winning games.

The Theatrical Release version that came out earlier on 6 March 1999 had five different cards from the regular version. Among them was Aqua Madoor with an incredible high DEF 2000.

Pre-Orders of the regular version came with Celtic Guardian, a ATK 1400 Warrior tied with Kanan the Swordmistress.

Running Legendary Sword becomes a viable strategy now that the deck has multiple Warriors in Kanan the Swordmistress, Celtic Guardian and Gaia The Fierce Knight. 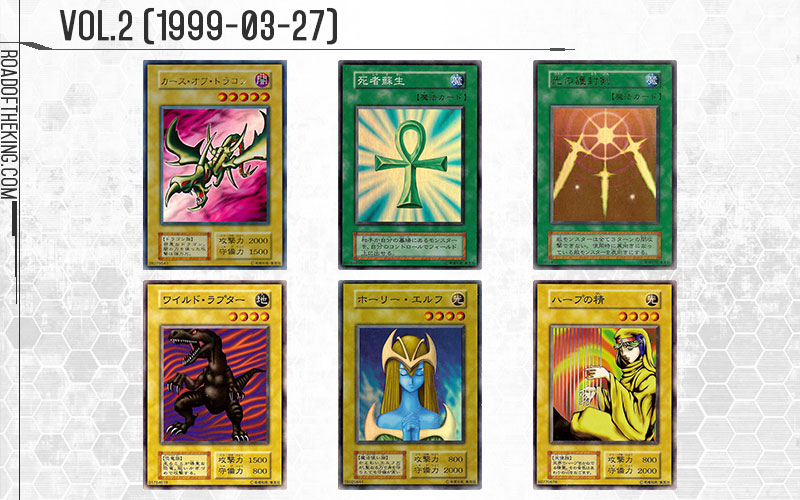 Monster Reborn is ideally used to revive Blue-Eyes White Dragon, and Swords of Revealing Light buys you additional turns while you try to draw your power cards.

DEF 2000 is now the new power level with Mystical Elf and Spirit of the Harp joining Aqua Madoor. Having DEF 2000 meant that they could survive against Curse of Dragon. When even Uraby is not being played, Kanan the Swordmistress‘ relevance in the metagame is very much over. 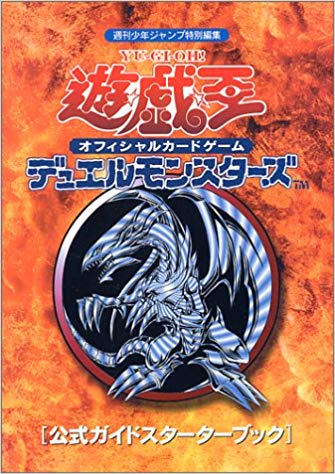 This rule came a little too late and despite Kanan the Swordmistress having the 2nd highest ATK among Level 4 and lower monsters, the wall of DEF 2000 monsters is just too high to overcome. 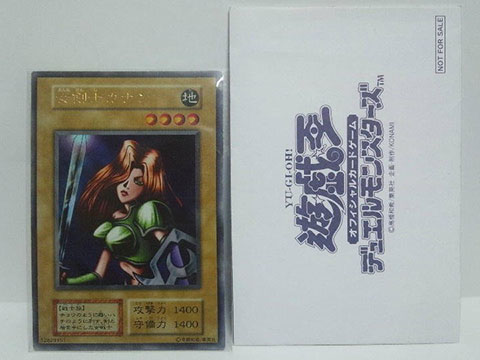 Kanan the Swordmistress is the very first OCG promotional card ever released and 400 Ultra Rare copies were given out during the “Game Boy Yu-Gi-Oh! Duel Monsters National Tournament” held on 21 February 1999. 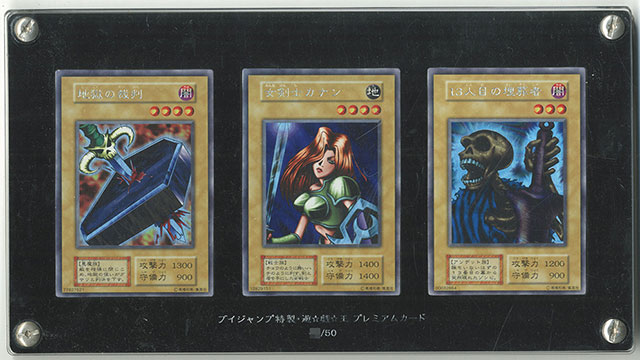 V Jump ran a raffle in their August 1999 issue on 21 June 1999, giving out 50 each of Set A and Set B. A Secret Ultra Rare version of Kanan the Swordmistress came in Set A together with Trial of Nightmare and The 13th Grave. 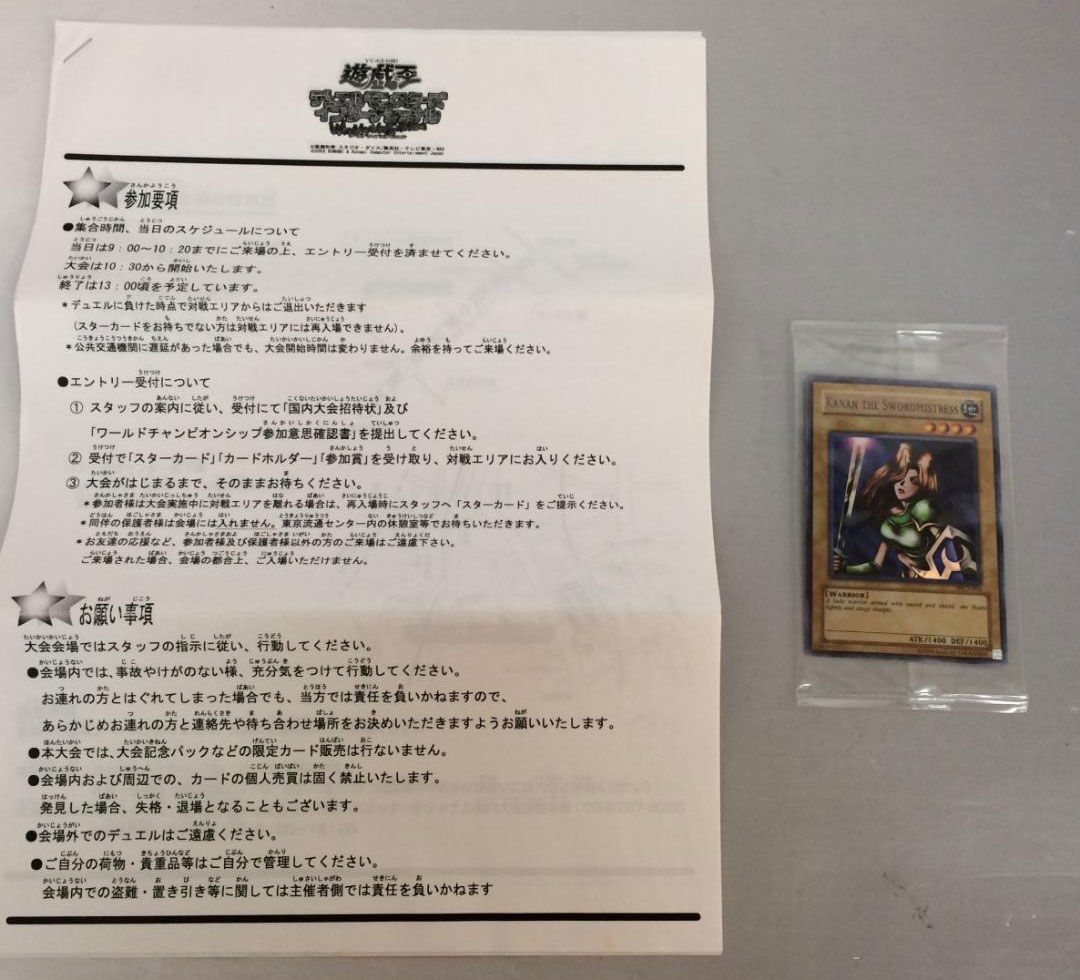 A Super Rare Asian-English version of Kanan the Swordmistress was given out during the Japan World Championship Qualifier 2003 held on 27 June 2003, to all partipants playing in the OCG tournament and the Game Boy Advance Yu-Gi-Oh! Duel Monsters International – Worldwide Edition tournament. 1600 copies were made and they were also distributed in the TCG regions. 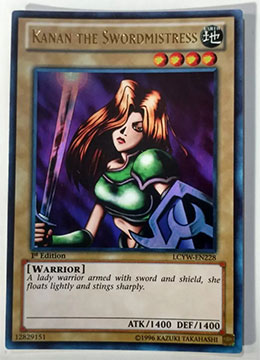 Kanan the Swordmistress finally made her debut in the TCG as an Ultra Rare in Legendary Collection 3: Yugi’s World Mega Pack, released on 2 October 2012. 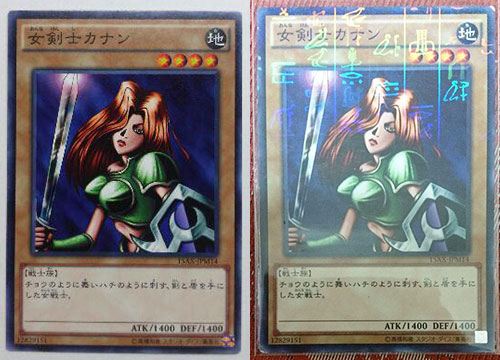 15 years after her initial print, Kanan the Swordmistress was finally reprinted as Normal and Millennium Rare in the 15th Anniversary Product: Duelist Road -Piece of Memory- Side: Yugi Muto, released on 10 January 2015. 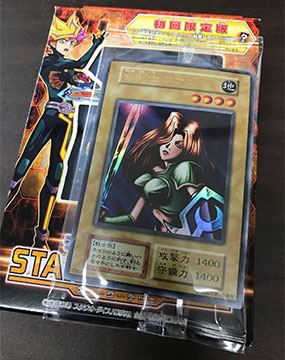 The first print run of Starter Deck 2018, released on 24 March 2018, came randomly packed with either a Token card or a rare card from the past. 10 Ultra Rare Kanan the Swordmistress were among the rare cards that could be pulled from the deck. 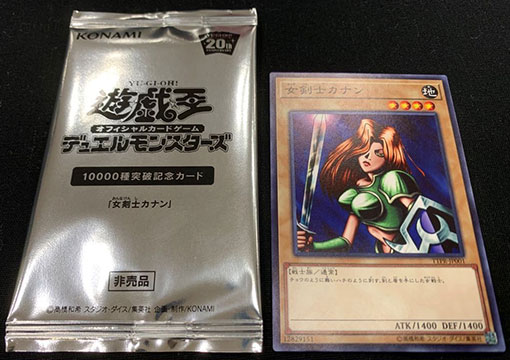 30000 Special Packs containing a Normal Kanan the Swordmistress will be distributed during the exhibitions across all three venues. 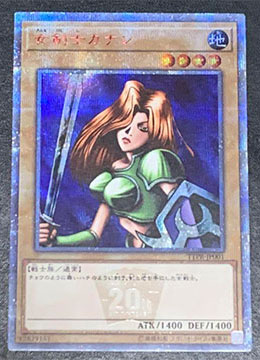 Kanan the Swordmistress holds a special place among the pioneers of the Yu-Gi-Oh! OCG, being a powerful monster in the early days.

Despite knowing how the best deck could be built, almost no one had a completely optimised deck back in 1999. Card Shops focused on selling trading cards were largely unheard of, thus obtaining single cards was mostly impossible. Truth be told, there was no metagaming as everyone was playing whatever best cards they had pulled from their booster packs.

Among the collectors, Kanan the Swordmistress is still a highly valued collector item due to the lack of reprints for more than 10 years. Even then, the reprints were often in lower rarities, keeping the Ultra Rare print valuable.

The 20th Secret Rare would be the first time that Kanan the Swordmistress is getting a rarity upgrade since 1999, and quite appropriately so on the 20th year since her debut.