With only minor changes to the OCG 2021.01 Limit Regulation, the format remains largely the same as the previous.

Compiled from a total of 666 top-placing decks from 117 competitive tournaments held in Japan, mainland China, Taiwan and Vietnam, here is the final metagame breakdown of the OCG 2021.01 format.

Virtual World entered the format strong, unaffected by the Limit Regulation. Zoodiac was their main weak match-up, as Zoodiac Drident could chain its destruction effect to the Virtual World monster effect causing it to miss target and be unable to Special Summon itself from hand. However, Eldlich was able to keep Zoodiac in check.

Zoodiac was initially kept in check by Eldlich, but that changed with the release of Lightning Overdrive. The rise of Drytron shifted the metagame away from a Trap-based format to a more ‘hand trap’ heavy format, bringing Zoodiac back to the forefront.

This format saw Zoodiac Eldlich became the preferred build as Zoodiac provided access to Zoodiac Drident and Divine Arsenal AA-ZEUS – Sky Thunder which improved their opening setup and ability to clear the board when going second.

Lightning Overdrive gave Drytron Mu Beta Fafnir to Drytron, greatly improving their consistency. Drytron is the most powerful combo deck in this format, being able to setup an almost unbreakable board of Herald of Ultimateness and Vanity’s Ruler.

However, Drytron was vulnerable to many various ‘hand traps’ such as Droll & Lock Bird, Ally of Justice Cycle Reader and struggled to make plays when the metagame is prepared against them. 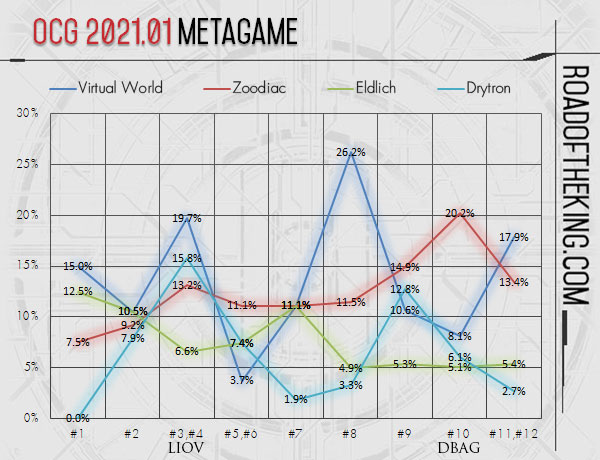 The OCG 2021.01 format remained largely the same as Lightning Overdrive and Deck Build Pack: Ancient Guardians are the only two booster sets released with new cards.

Lightning Overdrive largest impact was pivoting Drytron to the top, but they were unable to perform consistently. They also boosted Tri-Brigade, which started seeing a bit more success in the competitive scene.

Overall, the metagame was in a state of fluid as no decks could consistently remained on top, and thus there is no single dominating strategy. The decks are surprisingly closed in the amount of top-placings too, Virtual World barely edged out Zoodiac with just 3 counts, while Eldlich and Drytron are seperated by a mere difference of 1 count.