The OCG 2019.01 Limit Regulation took another swing at the big 3 – Sky Striker, Gouki and Altergeist – and finally displaced them as top contenders.

This opening paved the way for Salamangreat to take the top spot and it remains as the top contender throughout the format.

Compiled from a total of 413 top-placing decks from 70 competitive tournaments held in Japan, China and Asia, here is the final metagame breakdown of the OCG 2019.01 format. 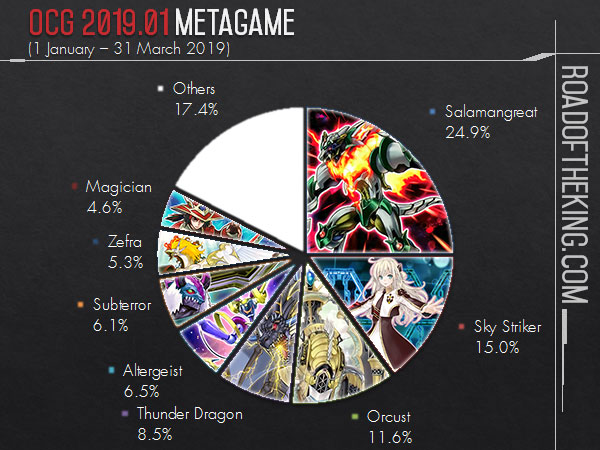 Salamangreat is a typical beatdown deck that is great at generating resources.

Salamangreat Sunlight Wolf is able salvage a FIRE Monster and a Salamangreat Spell/Trap from the graveyard, allowing the player to generate card advantage every turn if left unchecked.

Salamangreat biggest advantage is its consistency, being able to run 3 Lady Debug and 3 Salamangreat Circle ensures that it can consistently open with Salamangreat Gazelle to start off its combo.

Salamangreat remains a strong contender in OCG 2019.04, but is no longer dominating.

With Sky Striker Ace – Kagari limited, it came as a surprise that Sky Striker were still able to compete.

Pot of Avarice allowed them to recycle their Kagari and generate card advantage.

Sky Striker was untouched by the OCG 2019.04 Limit Regulation, but they have largely fallen out of flavor.

The release of Dingirsu, the Orcust of the Evening Star and Orcust Crescendo in Dark Neostorm propelled Orcust to a top contender.

That will lead to Dingirsu, the Orcust of the Evening Star with The Phantom Knights of Rusty Bardiche to pick off two cards from the opponent, and backed by Phantom Knights’ Fog Blades.

There are many ways to bring out Knightmare Phoenix or Knightmare Cerberus, such as the Sky Striker or Trickstar engine. But Armageddon Knight into Destrudo the Lost Dragon’s Frisson became the preferred opener as it could bring out Crystron Halqifibrax to go into Borreload Savage Dragon.

Without Armageddon Knight, players are switching to Sangan or Assault Mode engine for the Crystron Halqifibrax combo.

Orcust remains as a top contender in OCG 2019.04 and one of the deck to beat.

They are fantastic against Salamangreat, Sky Striker and Orcust, hence players are running them in the Main Deck to improve their Game 1 match-ups against these decks.

However, this puts Thunder Dragon, Altergeist and Subterror in a stronger position for Game 1 as they are largely unaffected by D.D. Crow, and could play around Fantastical Dragon Phantazmay by not Link Summoning.

This makes deck building much more strategic as players have to evaluate the metagame in their own region and adjust the amount of Fantastical Dragon Phantazmay and D.D. Crow in the Main Deck accordingly.

The popularity of the various top decks varies across the different regions.