This report will cover 47 top-performing decks from 9 tournaments that were held in Japan during 2 – 3 December 2017. 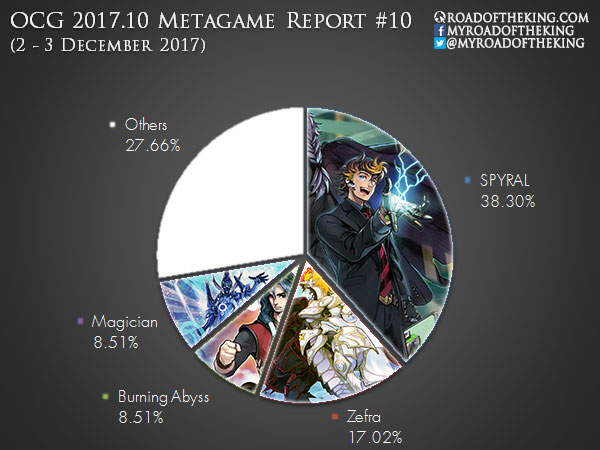 With the rise of Pendulum decks, Zefra and Magician, we are seeing SPYRAL switching out Twin Twisters for Cosmic Cyclone in the Side Deck.

Poseidra (ぽせいどら‏) played Grinder SPYRAL in the “22nd Takatsuki CS with Hatti CS” which had 50 participants.
He went 9-0 and finished in 1st place. 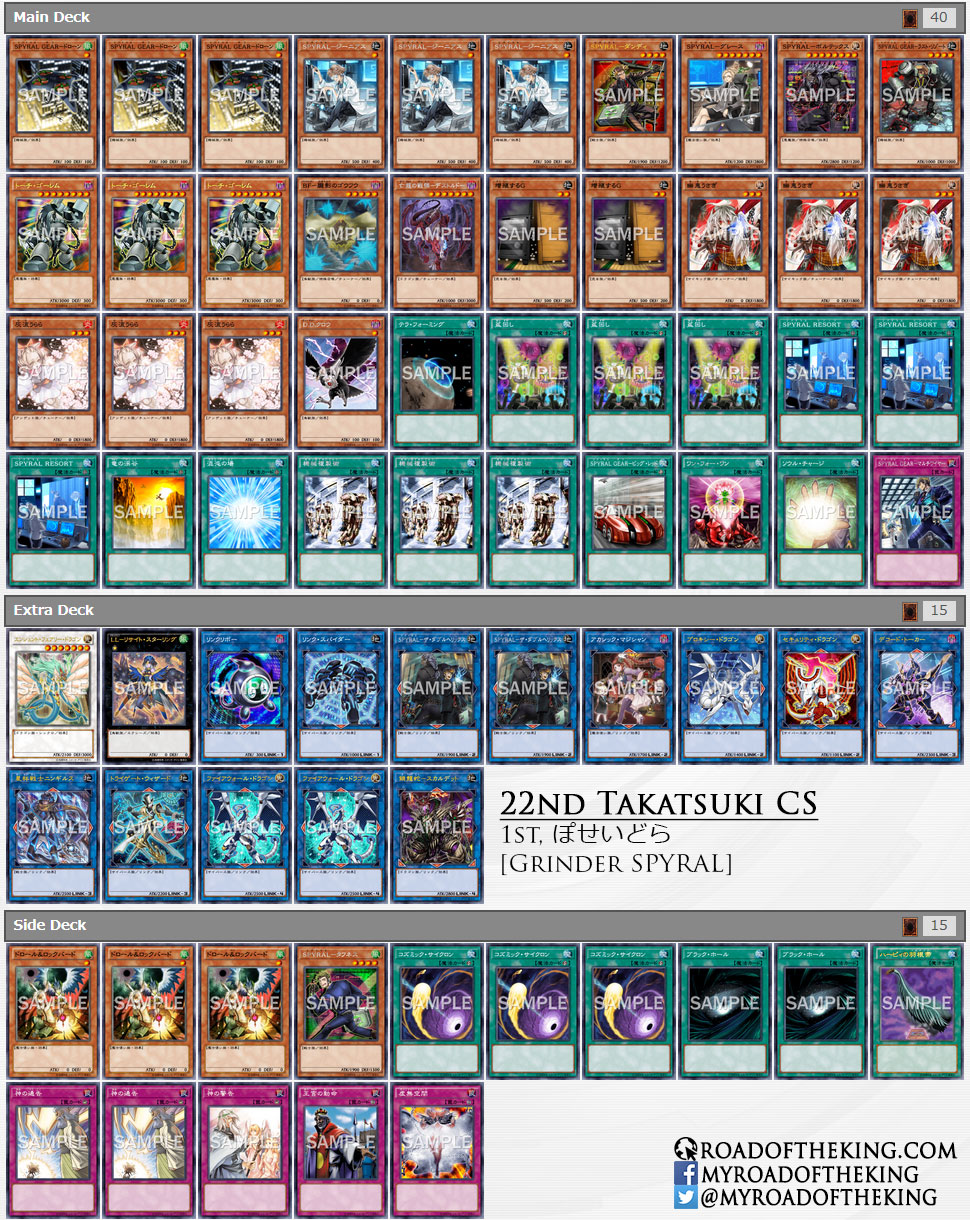 The Predaplant combo is more explosive with Instant Fusion in the mix, but the Darkwurm combo is more consistent with fewer dead draws. If Supreme King Dragon Darkwurm is drawn, it can still be Normal Summoned to fetch for Supreme King Gate Zero, and Dragon Shrine can still be used to send Destrudo the Lost Dragon’s Frisson from the Deck to the Graveyard.

Macaroni (まかろに) played Zefra in the “22nd Takatsuki CS with Hatti CS”.
He went 8-1, losing only to Poseidra’s Grinder SPYRAL in the final match, and finished in 2nd place. 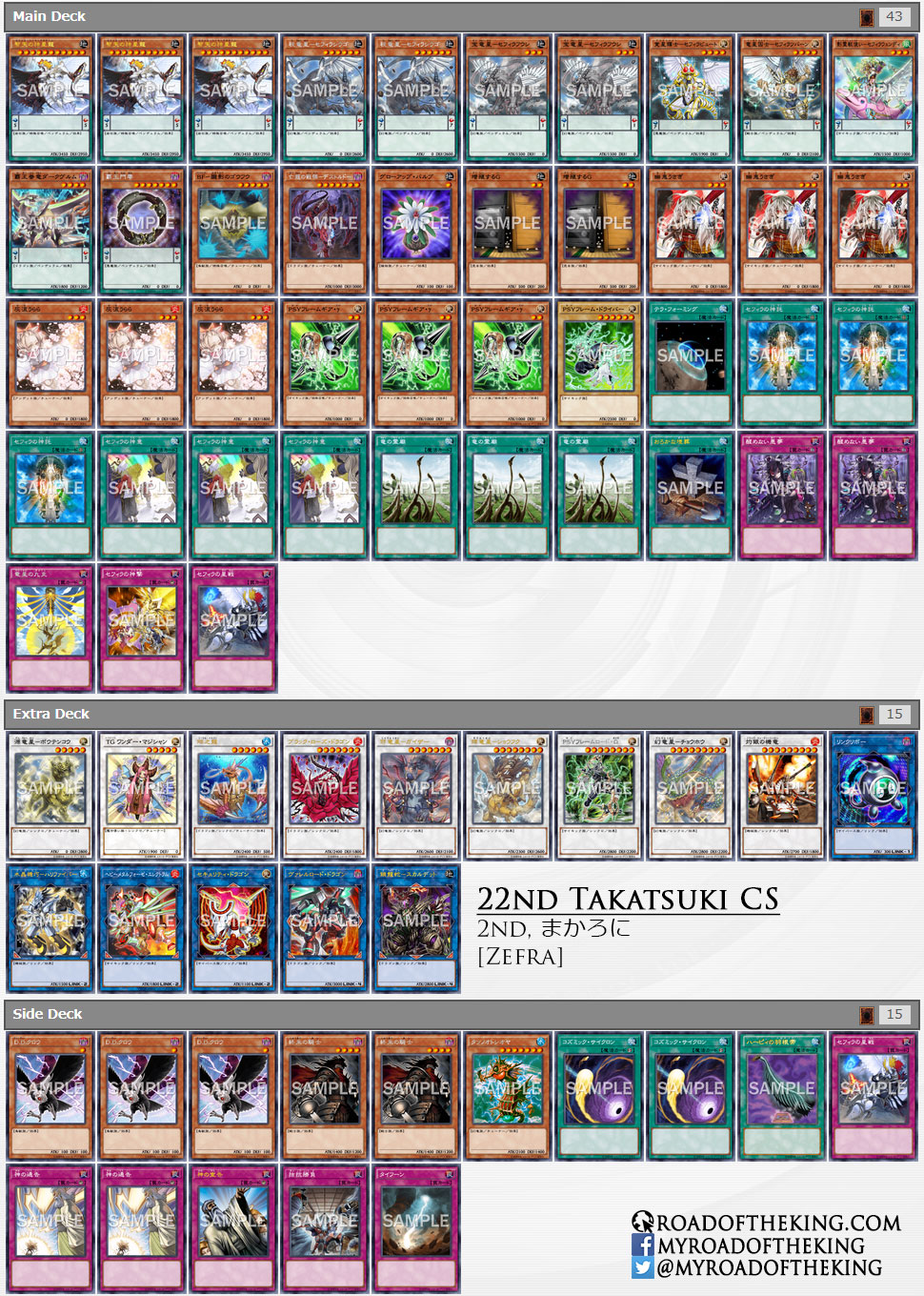 The Burning Abyss deck featured this week is unorthodox.

While most Burning Abyss are still using Skill Drain to disrupt the opponent, this deck chose to run Nekroz to lock the opponent using Djinn Releaser of Rituals.

Summoning Nekroz of Clausolas into a Monster Zone that is pointed to by Cherubini, Ebon Angel of the Burning Abyss‘s Link Arrow would also protect Clausolas from being destroyed by effect, making it even harder for the opponent to break out of the Djinn lock.

Goddess (ゴッデス) played Nekroz Burning Abyss in the “Batoloco Oyama Tournament” which had 32 participants.
He went 7-0 and finished in 1st place. 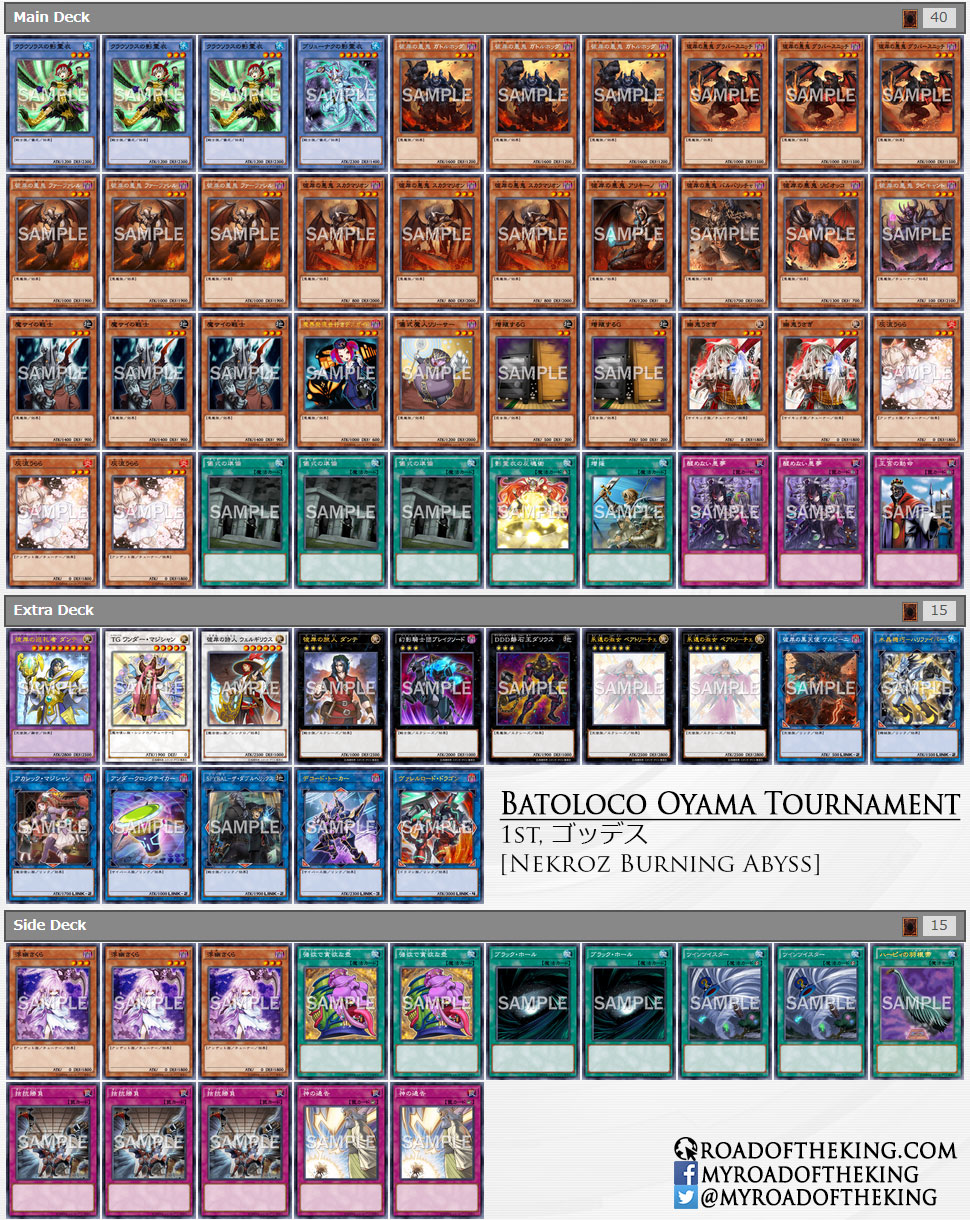 Together Supreme King Gate Zero from the earlier Darkwurm and Double Iris Magician would make Pendulum Scale 0 to 8, opening up various Pendulum plays. The typical play is to Link Summon Crystron Halqifibrax using Harmonizing Magician. Crystron Halqifibrax would Special Summon Ghost Ogre & Snow Rabbit from deck, and on the opponent’s turn it could be banished to Special Summon Crystron Quandax. Crystron Quandax + any DARK Magician Monster would bring out Supreme King Dragon Clear Wing, whose effect would wipe the opponent’s face-up monsters during their turn.

Odd-Eyes Revolution Dragon is mainly used to fetch for Supreme King Dragon Darkwurm, but it could also be used to search for Amorphage Sloth. Amorphage Sloth is a decent tech card to stop the opponent from accessing his Extra Deck.

Riiru (リール) played Supreme King Magician in the “2nd Kyokuhoku Cup” which had 48 participants.
He went 6-2, losing his last 2 matches, and finished in 4th place. 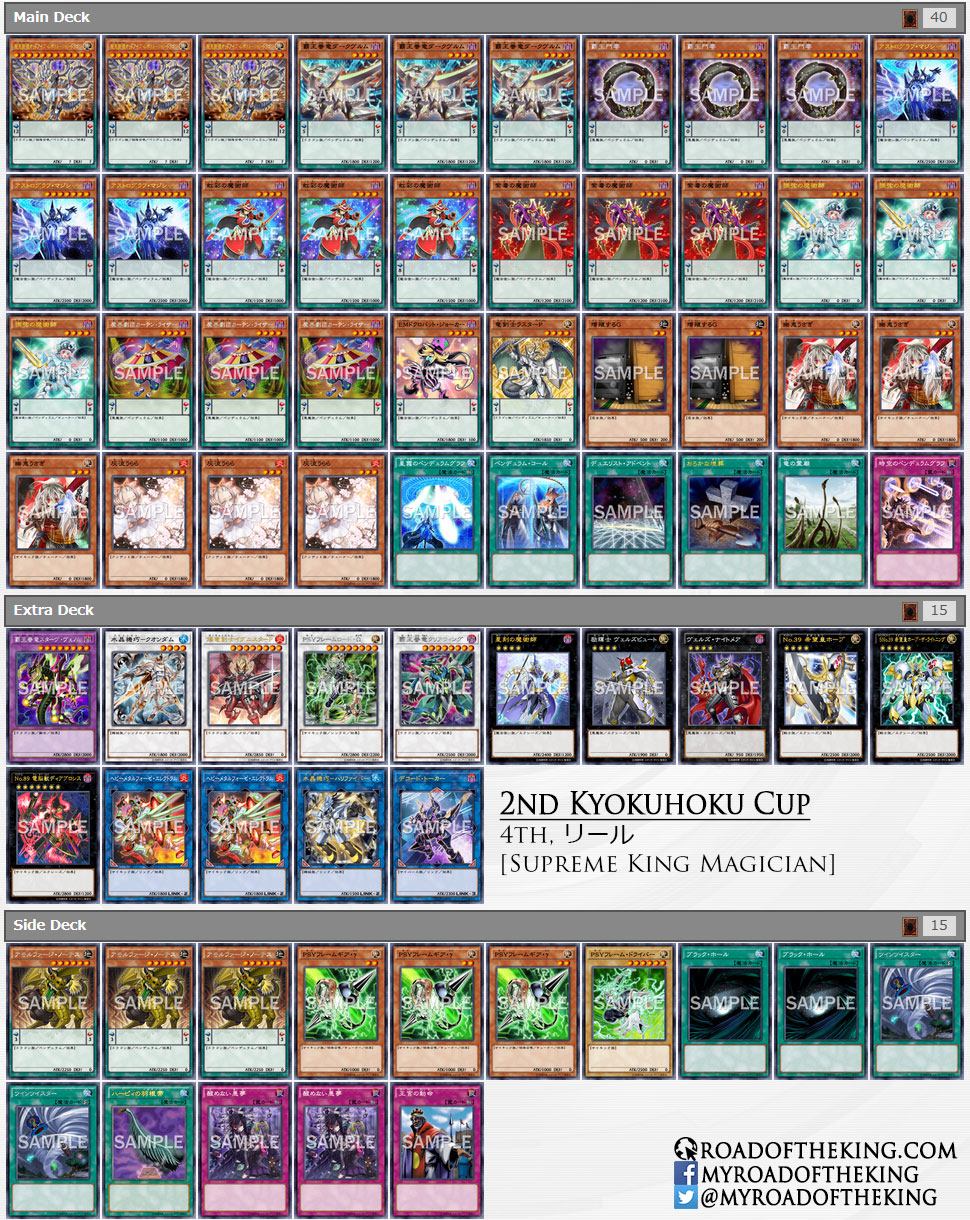 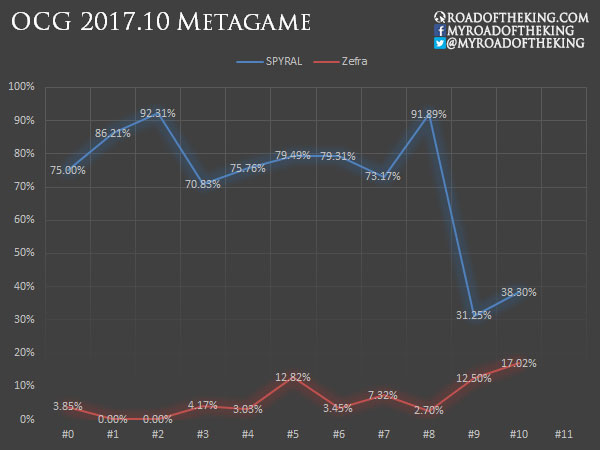 SPYRAL is still holding strong at the top.

Zefra follows behind, carried by their new double negation combo.

Burning Abyss is faltering a bit as they struggle against SPYRAL. When given a Field Spell Card by the opponent’s Set Rotation, the Malebranche of the Burning Abyss will become unable to Special Summon themselves from Hand.

Magician’s opening play is relatively underwhelming, they lack negation and is vulnerable to Dark Hole. They have very high OTK potential with Supreme King Dragon Starving Venom copying Odd-Eyes Revolution Dragon‘s effect, but it is a steep uphill battle to go second against SPYRAL.