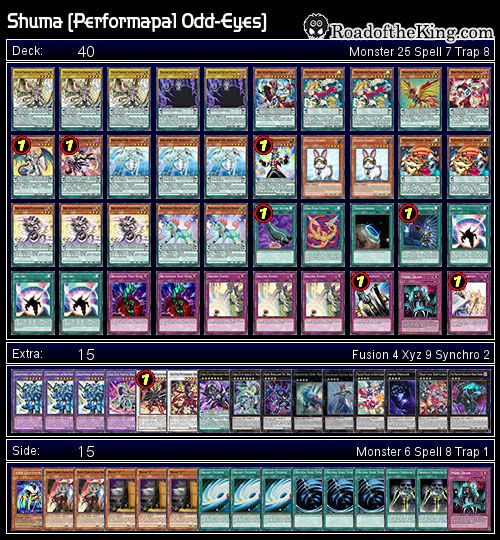 Shuma (しゅーま) went 6-2-1 with his Performapal Odd-Eyes Dracoslayer. Using the OCG 2016.01 Performapal Dracoslayer as the skeleton build, Shuma chose to replace the cards affected by the Forbidden and Limited List with Odd-Eyes support.

To double up on the consistency, Shuma ran a full playset of Sky Iris to fetch Performapal Odd-Eyes Unicorn and Odd-Eyes Persona Dragon. Sky Iris can also fetch Odd-Eyes Fusion, allowing Shuma to summon an Odd-Eyes Vortex Dragon when the opportunity arise. 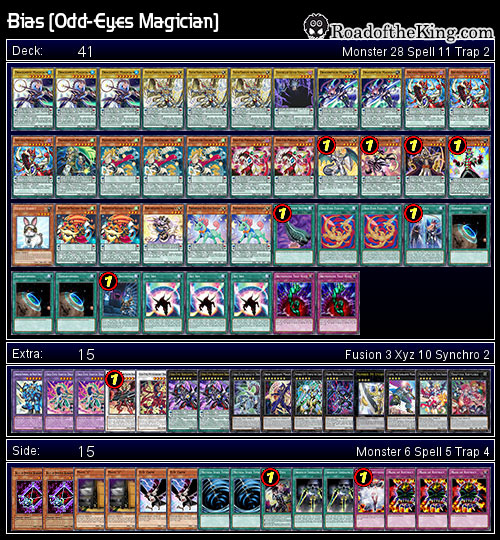 Bias (ばいあす) went 6-3 with his Odd-Eyes Magician Dracoslayer. Bias’ build is a reminiscence of the Magician deck that was briefly popular during the Asia Championship 2015.

In addition to Performapal Odd-Eyes Unicorn and Odd-Eyes Persona Dragon, Dragonpulse Magician and Dragonpit Magician doubles up as Pendulum Scales of 1 to 8.

Running light on traps, Odd-Eyes Magician depends on Odd-Eyes Fusion to bring out Odd-Eyes Vortex Dragon and establish a soft-lock on the opponent.

Odd-Eyes Magician Dracoslayer is another option with more reliance on the Odd-Eyes engine.

The new OCG 2016.04 metagame seems to be shaping up towards Phantom Knights Burning Abyss and Blue-Eyes, so some slight adjustment might be necessary to keep up with the metagame.