Tournaments held over the past weekend were heavily dominated by SPYRAL in the OCG competitive scene. While the lack of diversity is disconcerting, the ample amount of top-placing SPYRAL deck lists allow us to have a decent amount of data to perform an analysis.

This small sample size of SPYRAL deck lists is insufficient to draw a comprehensive conclusion, but it would at least provide a good insight into the current deck building trends for SPYRAL in the OCG.

7 tournaments were held in Japan over the period of 23 – 26 September 2017. The tournaments have varying participation rate, ranging from 30 players to 161 players, and the players played either as an individual, in teams of 2s, or in teams of 3s.

37 SPYRAL deck lists that finished in Top 8 or better have been compiled into a spreadsheet in order to tabulate and calculate the popularity and frequency of each card that was played.

On the average, these are the most popular ratios that players are running.

Some players may prefer to run only 2 SPYRAL Super Agent, but they would often supplement with 1 Reinforcement of the Army.

While not all SPYRAL decks are running Set Rotation, I believe it is an automatic inclusion due to the huge increase in consistency it brings about from searching SPYRAL Resort.

Blackwing – Gofu the Vague Shadow and Soul Charge are largely still in the experimental stages as players are still figuring out the various optimal combos. Outside of opening combos, Gofu and Soul Charge are still respectable cards to top deck when the game develops into a battle of attrition. This is apparent when compared with Double Summon and Foolish Burial Goods.

After much thoughts, Reinforcement of the Army appears to be a strong inclusion for SPYRAL. While it may seem a little redundant in the Main Deck with only SPYRAL Super Agent, but after Side Decking it could search for SPYRAL Tough. Having additional methods to search for SPYRAL Tough is going to be useful for breaking out of sticky situations.

Ghost Reaper & Winter Cherries is ran in every SPYRAL deck. While 27 players ran it in their Main Deck, the other 10 players have it in their Side Deck.

Every card here is part of a combo, except for Ningirsu the World Chalice Warrior. Although Ningirsu is not part of any combo, it is one of the most reliable answer that SPYRAL has.

Blackwing – Gofu the Vague Shadow is also an indirect 1-card Ningirsu without having to use the Normal Summon.

SPYRAL Tough is the best answer that SPYRAL can run, and he is so good that some players are simply running him in the Main Deck.

Most of the Side Decks are filled with good generic removals such as Dark Hole, Harpie’s Feather Duster, Twin Twisters, and Torrential Tribute.

The effectiveness of Artifact Scythe and Artifact Sanctum is still questionable as only half of the players are running it. On a positive note, SPYRAL decks can afford to run just 1 Artifact Scythe since it can be shuffled back into the deck by SPYRAL Resort. This would minimize the chances of drawing into Artifact Scythe. 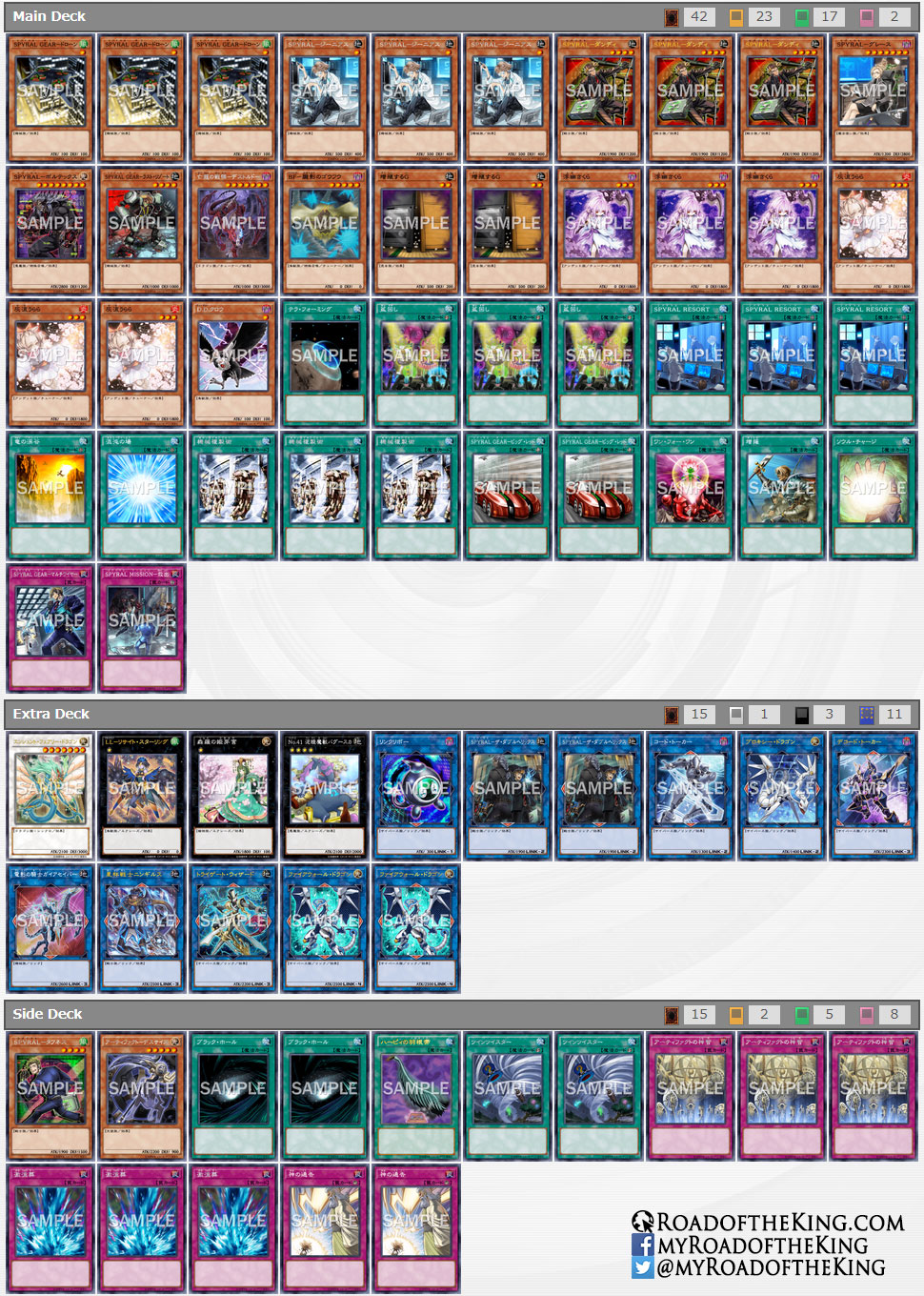 This is not a proper build since it is merely an aggregation of 37 SPYRAL decks. However, it should give a modest illustration of the current popular cards being played in a SPYRAL deck.