No better timing to be playing an Evangelion deck than on the 20th Anniversary of Neon Genesis Evangelion TV series. 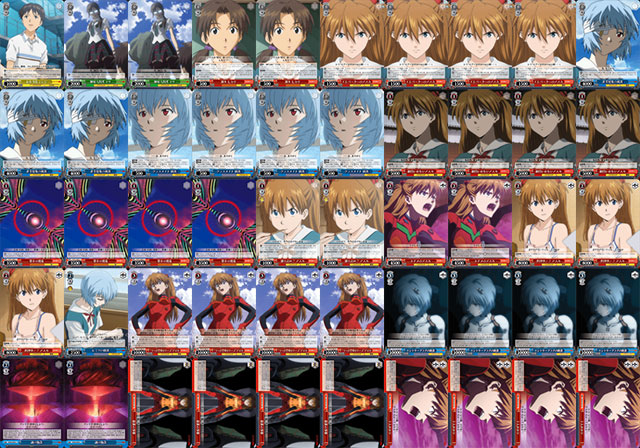 I believe that the EVA-01 (Awaken State 1) is a better build for Evangelion, but I couldn’t acquire a playset before the tournament so I ran with Ayanami, Entry Plug instead.

It is also better to be running 4 copies of Ayanami, Emergency Conscription, which I’m lacking of a copy.

I opened with a hand full of Climax and Level 0. Forced to go all out with +1000 Power and +1 Soul rush twice in a roll.

He lamented that he was unable to draw into Aoi, True Feelings to get his healing started.

I opened with a much slower hand this time round and wasn’t able to get much damage in.

However, halfway into the match at around 2.5, a Judge intervened to give me a Game Loss.

“I have to give you a Game Loss for using unofficial sleeves,” said the Judge.

“Sorry, but official sleeves are those with a copyright printed on it.”

“Alright, could I appeal then?”

The Judge flipped over his Judge tag and retorted, “I’m the Judge.”

“I meant could I appeal to the Head Judge?”

The Judge left out a sigh and took out a piece of paper with some numbers written on it. “These are the people that I have given a Game Loss for sleeves today. Aiyo, I’m surprised I didn’t catch you earlier. If I get the Head Judge over, he will DQ you and take away your tag so you won’t be getting your participation PR card. I’m kinder than the Head Judge, I will just give you a Game Loss. You got 2 wins so you will still have a chance to make Top 8.”

The Judge seems rather reluctant to bring the Head Judge over and the threat of taking away my tag seems like he wasn’t going to budge on his decision.

The situation was going nowhere, so I reluctantly accepted the Game Loss and cooperated with the Judge. He recommended that I get a change of sleeves.

My opponent offered his apology as he was surprised by the sudden outcome as well.

I was unable to replace my sleeves, so I was prepared to get another Game Loss. But I wanted a second opinion, so I checked with another Judge that was giving out result slips.

He confirmed that generic black sleeves like Ultra Pro are fine. He reaffirmed that unofficial sleeves refers to doujin sleeves that did not obtain license for their usage of copyright material.

I carried on with the game and opened poorly this time round. My Ayanami, Emergency Conscription hit a Climax and came into play rested, while I could only send a Level 2 to my Level Area when I leveled up to Level 1. This heavily restricted my plays as a couple of my cards requires Experience 3.

The same Judge from the previous round came over and intervened about my sleeves again.

I declared that I was the same player that was given a Game Loss the previous round and I was unable to obtain a change of sleeves. I added that another Judge told me that my sleeves are legal for the tournament, which my opponent concurred.

Due to the discrepancy, the Head Judge was finally brought over.

After a short inspection of my sleeves, the Head Judge gave his verdict. He reaffirmed that generic sleeves like Ultra Pro and KMC are legal to use like in MTG tournaments. However, he did mentioned that my sleeves were rather worn and could be constituted as Marked Sleeves.

I expressed my agreement since the sleeves were indeed worn since they were originally used for my MTG deck.

Before the Head Judge left, I confirmed that I could continue the current game with no additional penalty.

After the Head Judge left, the Judge warned that he was going to give me a Game Loss for having Marked Sleeves if I won my current game. I respectfully agreed since my sleeves were indeed worn, but the Judge’s action seemed rather dubious. The Head Judge had already decided that I was not getting any additional penalty, yet the Judge was rather intent on handing me another penalty.

Continuing the game, I had a good lead against my opponent cos she was missing her early drops. However, a critical Sinon, the Last Strike managed to shoot me for 4 damage. After the subsequent attacks, I was down to 3.6.

Unfortunately, I was unable to Clock to Draw 2 and only have enough cards to bring out 1 “Ace of the Euro Air Force” Asuka. The damage from my first attack was cancelled, and I could only bring my opponent down to 3.5 despite the Climax Combo.

The game ended with me losing on the next turn.

With the game ended, I called for a Judge to sign my result slip. The same Judge that gave me a Game Loss came over, but a neighboring table needed his attention. Instead of telling us to wait while he resolved the issue with the neighboring table, he threw a pen over. That was extremely unprofessional and dangerous.

Despite the obvious displeasure expressed by the Judge, I kept my composure and thanked the Judge for signing the result slip.

This was my best performance with my Evangelion deck, but unfortunately the run was cut short.

Bushiroad SEA and Genesis Frontier has come a long way in organizing tournaments, but their Judge Program is still rather lacking.

If I didn’t know better, the unprofessional Judge would had left me with a bad impression of Bushiroad SEA and Genesis Frontier as a whole, but fortunately, the professionalism shown by the Head Judge salvaged their reputation.

Perhaps Bushiroad SEA and Genesis Frontier should be a little more discerning with their choices of Judges. After all Judges are the faces of the tournament and their actions represent the companies that employ them.

Understanding rulings and tournament policies is just a minute part of being a good judge, tact and professionalism are the bread and butter.

I believe the newer Judges are relatively younger and immature. Hopefully time and experience will aid them in improving their people skills. 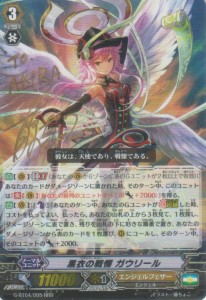 On a side note, I managed to get fuzichoco-sensei to sign a copy of Black Shiver, Gavrail.

The autograph session has been improving. The choice of marker is much better this time round.

The scan doesn’t do the autograph justice; it looks really sharp and golden like those printed signed cards.

The finals was really close, but lady luck was shining on Jeric; his opponent taking 3 damage and Clocking a Climax for refresh damage at Level 3 pretty much sealed the game.