Since the release of Series 11 booster sets, the OCG formats have been largely diverse. While there are certain decks that stands out in terms of performance, they no longer hold a dominating percentage, resulting in a wider spread of viable competitive decks.

This article will illustrate the OCG metagame paradigm using preliminary data from the new OCG 2022.01 format. 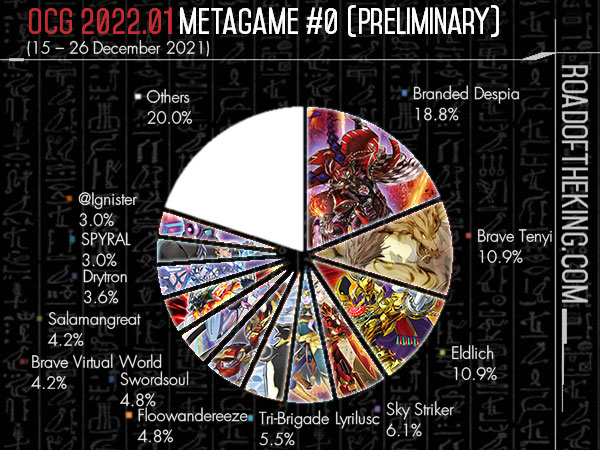 The above is the preliminary metagame breakdown of top-placing decks from tournaments played under the the new OCG 2022.01 Limit Regulation. The various competitive decks in the current metagame can be broadly classified into 3 playstyle: Control, Midrange and Combo.

Combo decks are the fastest. Their win condition could often be met on the first turn by opening with a threatening setup that is difficult for the opponent to answer.

Control decks are the slowest. They play the long game and rely on card advantage to slowly grind out the opponent.

Midrange decks are somewhere between Combo and Control. Their opening setup bring out just 2 or 3 threats, and are often supplemented with ‘hand traps’. Their aim is not to outright overwhelm and win from the get-go, but to disrupt the opponent enough to stay slightly ahead at every step. 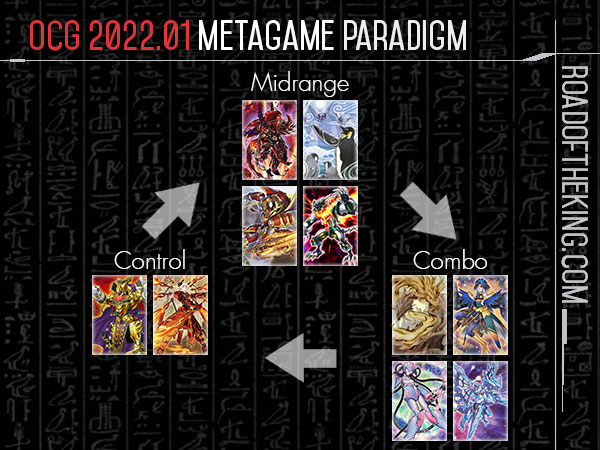 The three playstyles forms a Rock-Paper-Scissors dynamics as above.

In the Combo vs Control matchup, Combo has the advantage as they would open with a threatening setup that could quickly overwhelm before Control is able to stabilize.

In the Midrange vs Combo matchup, Midrange has the advantage as they run plenty of ‘hand traps’ to actively disrupt Combo from being able to achieve their optimal opening.

In the Control vs Midrange matchup, Control has the advantage as their Spells and Traps are much more efficient in trading resources compared to Midrange’s ‘hand traps’, resulting in better card advantage going into the late game. However, this advantage might narrow after Side Decking as Midrange could cut down on ‘hand traps’ and bring in more Spell/Trap removals.

The speed of the game is often decided by the faster playstyle. For example, in the Combo vs Control matchup, Combo would dictate the game by going all out and try to close out the game as fast as possible, while Control would want to slow down the game in order to stabilize. The roles that each deck plays here is key in understanding the flow of the game. Combo decks need to win fast because they would run out of threats as the game drags on.

Once Adventurer Tenyi uses up their only Mecha Phantom Beast Auroradon, it is difficult for them to setup another wave of big threats. On the other hand, Eldlich is able to accrue card advantage through the graveyard effects of Eldlixir and Golden Land. As such, Adventurer Tenyi is the initiator in this matchup, and will be actively making plays to overwhelm Eldlich. Since Eldlich fares better in the late game, they will try to stabilize before Adventurer Tenyi can overwhelm them, and that would sometimes involve making tempo plays that sacrifice card advantage.

Recognizing the roles of each deck also signifies that the initiator sometimes have to take certain risks in order to find an opportunity to win. If a Combo deck has an opportunity to OTK, they might have to take the chance and try to go for game despite running the risk of being thwarted by Nibiru, the Primal Being. Playing slow and going for a suboptimal play might put them further behind and they would be playing not to lose, instead of playing to win.

A common misunderstanding is that because the Yu-Gi-Oh! OCG has no mana cost, so there is no tempo in the game. The concept of tempo in card games actually originates from chess. If the opponent takes 4 moves to check you, but you take only 3 moves to check them, then you have the tempo advantage. As such, tempo can also be viewed as turns. 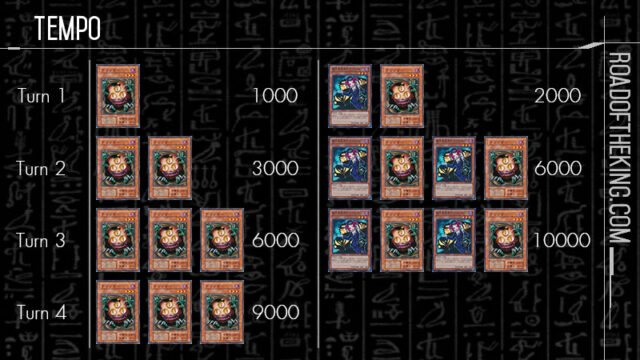 In modern Yu-Gi-Oh! OCG, Tempo can also be seen in card effects. Sky Striker Ace – Shizuku and Sky Striker Mecha Modules – Multirole generate resources during the End Phase, and these resources can only be utilized during the next turn, resulting in Sky Striker being a slow deck when it comes to achieving its win condition. When Sky Striker goes up against a Midrange deck, there is almost no need to play the fast tempo and take unnecessary risk. By playing the proper slow grind game, Sky Striker would usually come out ahead in card advantage during the late game, leading to a comfortable victory.