This report will tabulate 96 top-performing decks from 15 tournaments that were held in Japan and China during 11 – 13 January 2020. 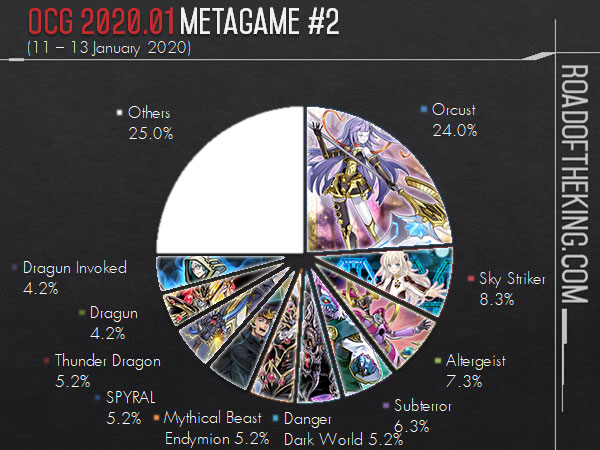 Girsu, the Orcust Mekk-Knight is a new card from Eternity Code that greatly improved Orcust. Its ① effect sends an “Orcust” or “World Legacy” card to the graveyard, fulfilling a similar role as Armageddon Knight and Scrap Recycler, but having Orcust in its name allows it to synergise with the other Orcust cards. Its ② effect Special Summons a “World Legacy Token” when it is the only monster on your field, making it a 1-card Galatea, the Orcust Automaton.

He cut 2 Mathematician and 1 Scrap Recycler for 3 Girsu, the Orcust Mekk-Knight.

However some players have chosen to cut 3 Scrap Recycler instead, and keeping the 2 Mathematician. Although Mathematician might seem restrictive in being only able to send Level 4 or lower monster, it could still reach Gizmek Orochi, the Serpentron Sky Slasher or World Legacy – “World Wand” in a roundabout manner. Mathematician could first send Orcust Harp Horror which in turn could Special Summon Orcust Knightmare. After using Orcust Knightmare as Link Material, its graveyard effect could then send Gizmek Orochi or World Wand to the graveyard. In this way, if the opening play was disrupted by Effect Veiler or Infinite Impermanence, then Mathematician could still draw 1 card when it is destroyed by battle and sent to the graveyard by the opponent later.

Scrap Recycler and Mathematician each have their pros and cons and we will have to see how the metagame develops before a conclusive decision could be made on which is better. 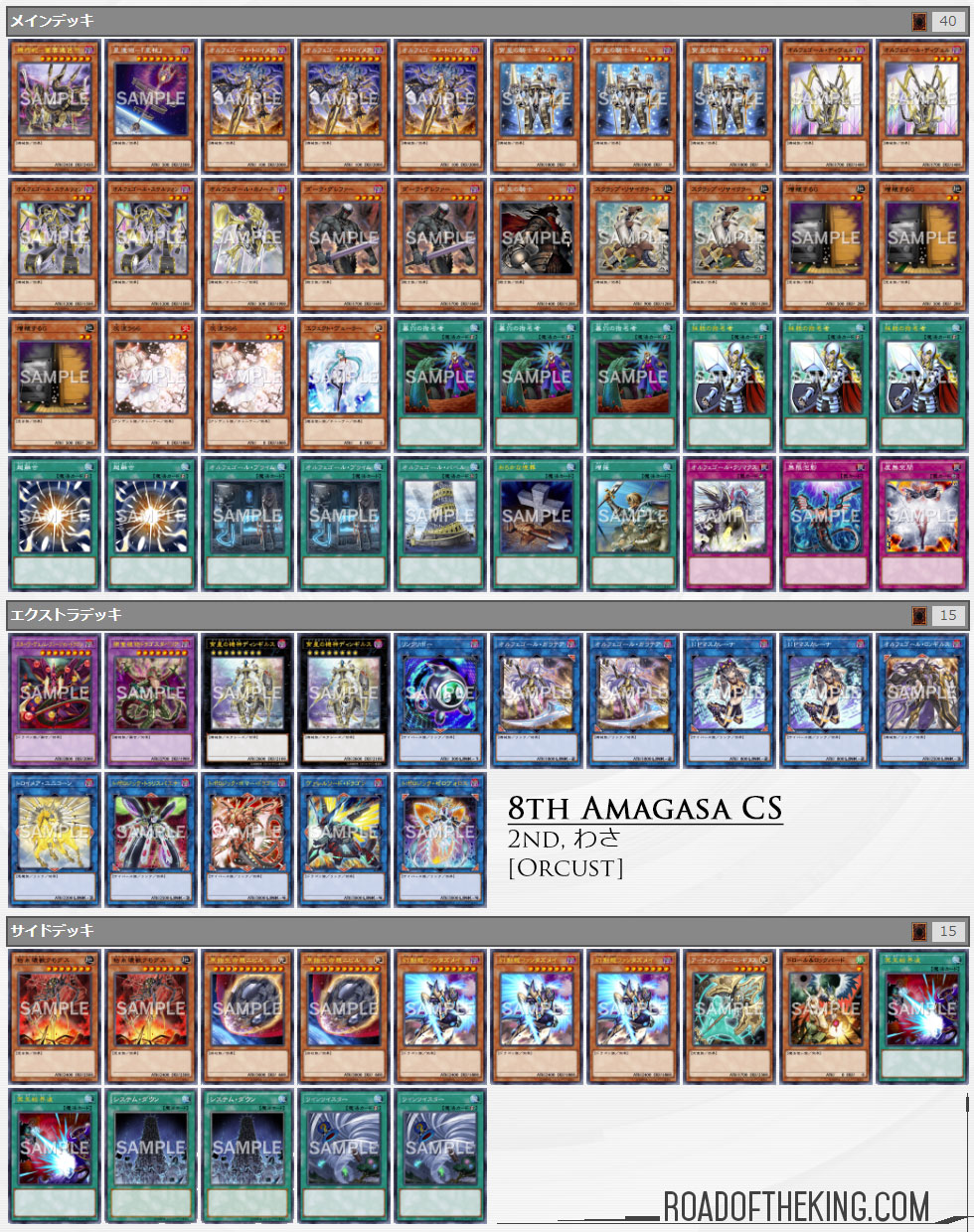 He ran 1 Accesscode Talker in the Extra Deck, a new powerful Link-4 monster from Eternity Code. 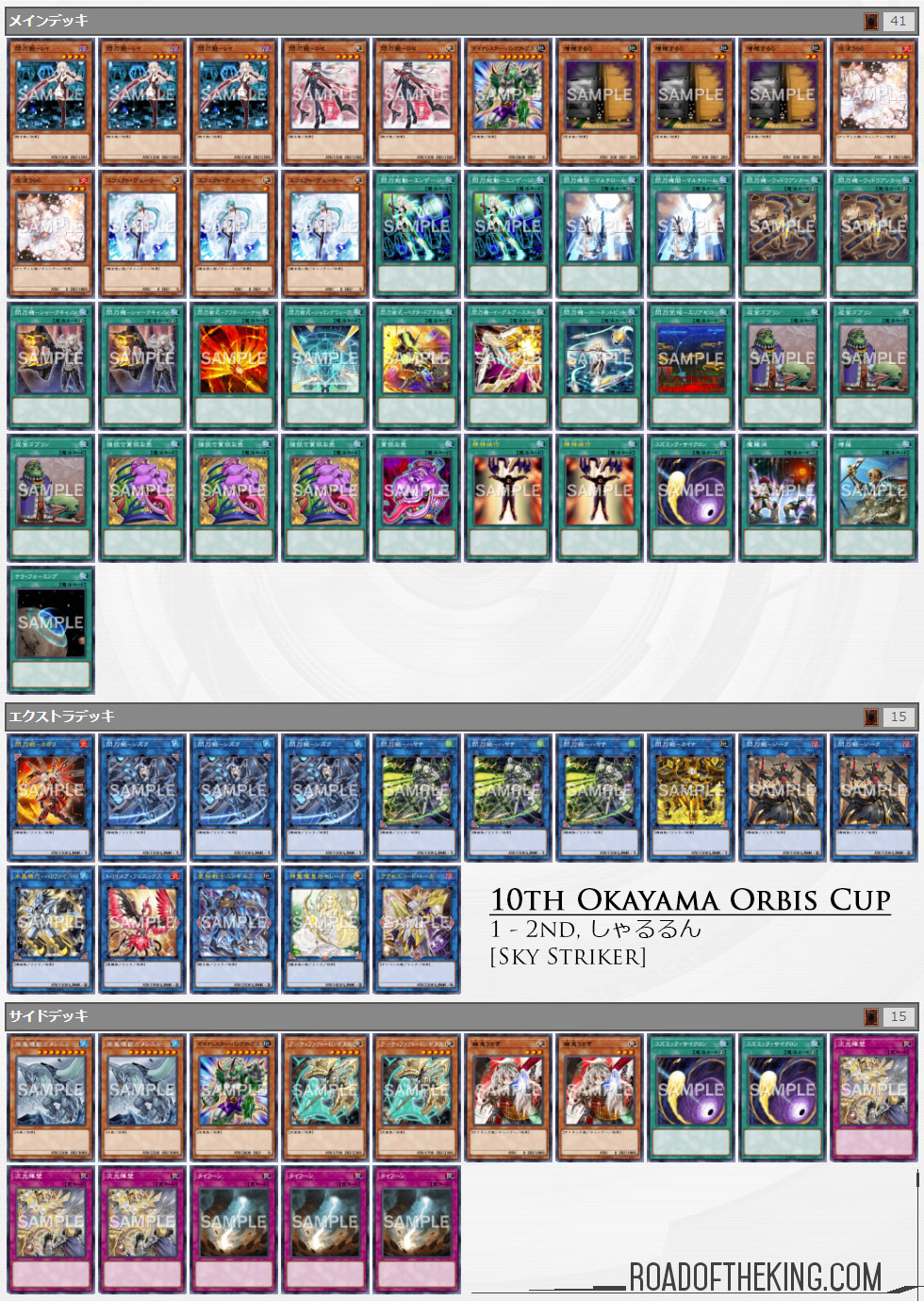 Then by using Altergeist Hexstia to Link Summon Linkross, that would trigger both monsters’ effects.

He ran 3 Altergeist Pookuery in the Main Deck to maximise his chances of opening with it, and 2 Linkross in the Extra Deck as a hedge against being banished by Pot of Extravagance. 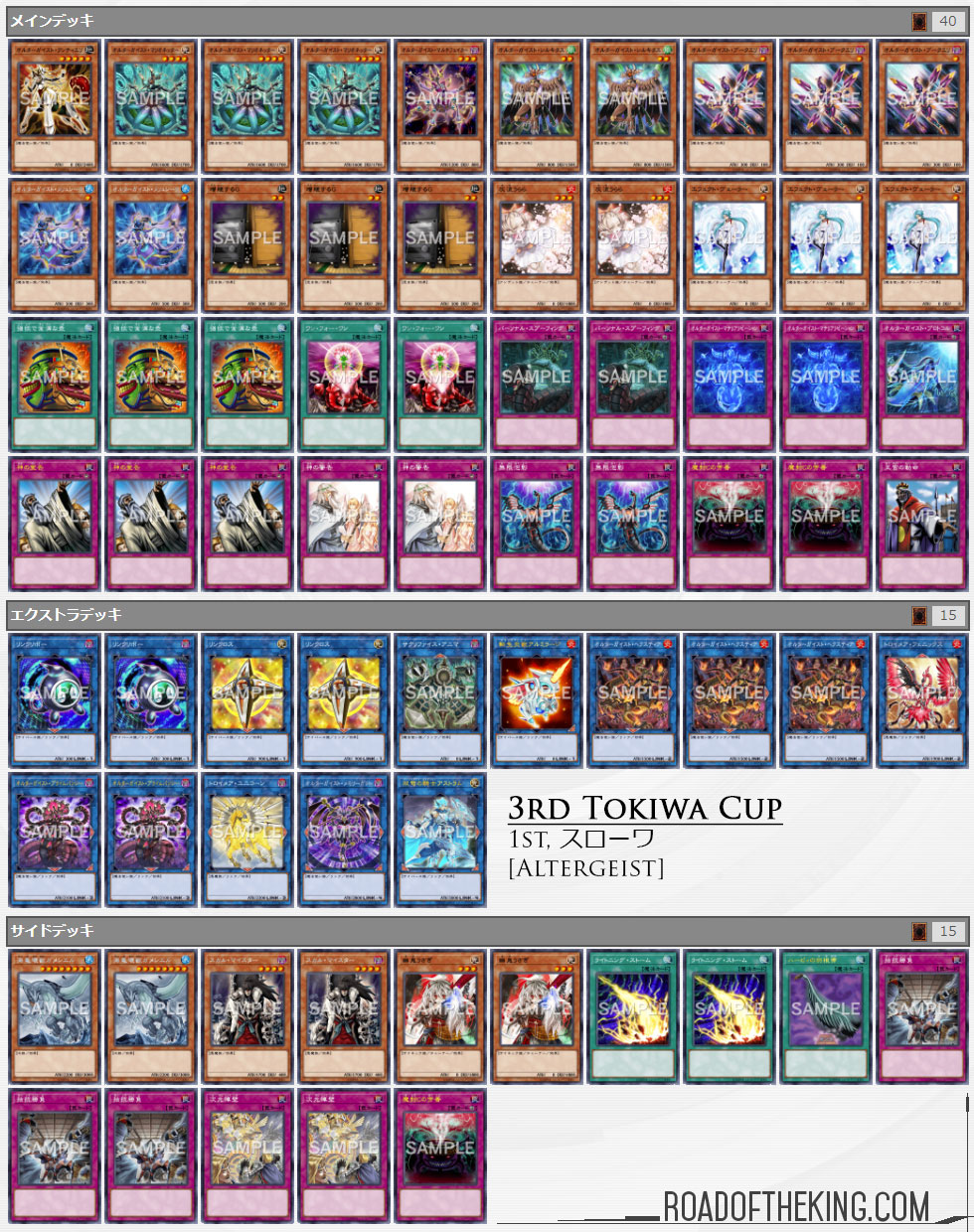 As Kaiju and Super Polymerization are popular cards to answer Red-Eyes Dark Dragoon, Akkun ran a small Releaser package in his deck to deny his opponent from Special Summoning.

Normal Summoning Tour Guide From the Underworld and then using its effect to Special Summon Sangan would enable to Link Summoning of Cherubini, Ebon Angel of the Burning Abyss. Sangan‘s effect would add Crusadia Arboria to hand, which could then be Special Summoned to a Zone that Cherubini is pointing to. Cherubini ③ effect is then activated by sending Djinn Releaser of Rituals to graveyard as cost to increase its own ATK.

Following that, Cherubini is used to Link Summon Linkross, and 2 “Link Tokens” is Special Summoned. Crusadia Arboria and 1 “Link Token” is then used to Synchro Summon Herald of the Arc Light. Using Linkross and Herald of the Arc Light to Link Summon Predaplant Verte Anaconda would send Arc Light to the graveyard, and trigger its ③ effect to add Nekroz of Clausolas from deck to hand.

As Nekroz of Clausolas is Ritual Summoned using Djinn Releaser of Rituals, the opponent cannot perform any Special Summon, and that would deny them from using Kaiju or Super Polymerization to clear Red-Eyes Dark Dragoon.

While Dark Ruler No More would be able to negate both Nekroz of Clausolas and Red-Eyes Dark Dragoon, but Djinn Releaser of Rituals‘ effect would still apply and the opponent is still unable to perform any Special Summon until Clausolas is no longer on the field.

The only answer to this board would be The Winged Dragon of Ra – Sphere Mode which Akkun is running 1 copy in the Side Deck prepared for the mirror match. 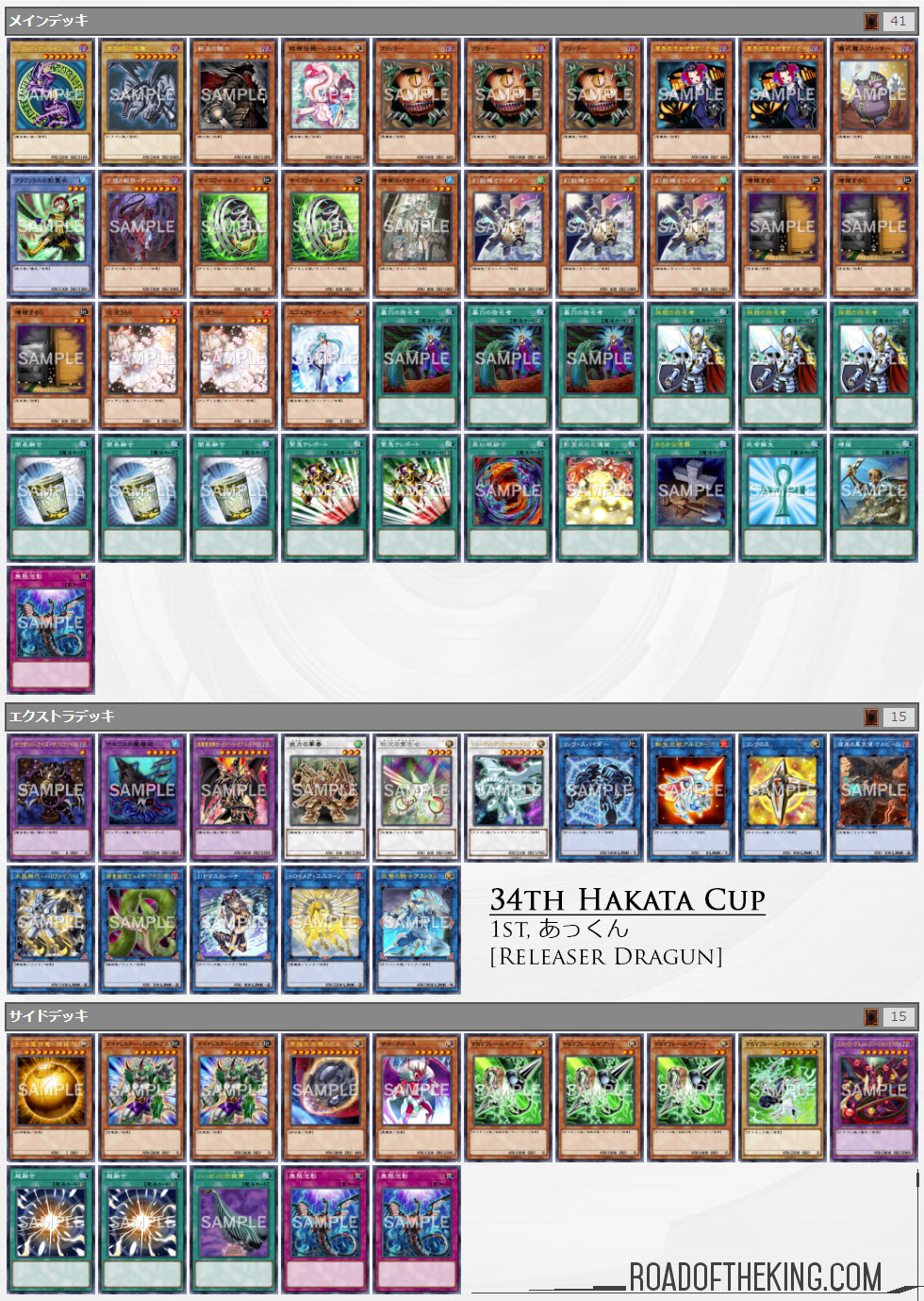 Eternity Code has an immediate impact on the competitive scene. Orcust was already a strong contender, and the addition of Girsu, the Orcust Mekk-Knight made it a cut above the rest.

Accesscode Talker is a pretty good generic Link-4 monster with an ability to destroy multiple opponent’s cards. Being able to be Link Summoned by Link climbing using Crystron Halqifibrax and Selene, the Sacred Empress of Magic makes it possible for many decks to adopt this strategy.

This is only the first week of Eternity Code‘s release and there could still be more potential of new cards yet to be discovered.