The OCG 2015.04 format has just rotated in and the metagame is rapidly shifting as various decks contest for the top spot.

A total of 121 top-placing deck lists were gathered from 14 Japanese tournaments which were held between 21st March 2015 to 5th April 2015, based on the current OCG 2015.04 Forbidden and Limited List.

Here is the preliminary metagame breakdown of the OCG 2015.04 format. 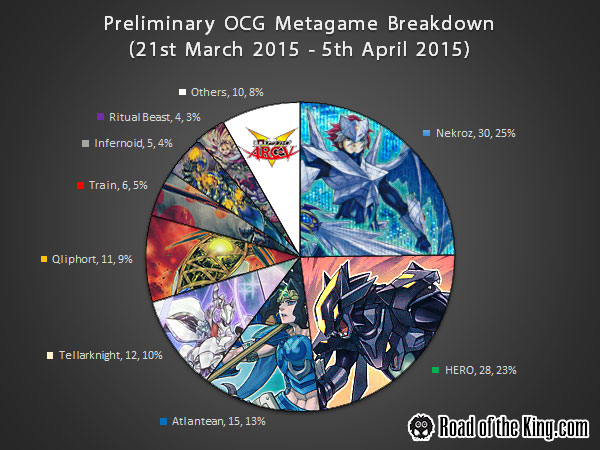 Despite the initial poor showing, Nekroz returned with a vengeance over the last weekend, taking the top spot once again.

Heroic Challenger – Assault Halberd makes it easier to perform a Rank 4 Xyz summon into Planetellarknight Ptolemaios for control with Cyber Dragon Infinity or Stellarknight Constellar Diamond, or into Number 39: Utopia for a quick finisher with Number S39: Utopia the Lightning.

The initial popularity of Atlanteans has propelled HERO to the 2nd position.

HERO has the unfair advantage of being able to summon Masked HERO Dark Law together with Cyber Dragon Infinity easily, often allowing HERO to win outright as the opponent finds themselves unable to breakout from the lock down.

Lava Golem can be seen in a couple of Side Deck as an attempt to breakout of the Masked HERO Dark Law + Cyber Dragon Infinity lock down, but its effectiveness is yet to be conclusively established.

Despite all the hype, Atlantean barely held onto its 3rd position, lagging far behind HERO and Nekroz.

As more decks are teching Effect Veiler, Maxx “C” and Yuki Usagi against Atlanteans, Atlantean finds themselves struggling to pull off their combo.

Over the weeks, Atlantean continues to experience a steady decline in popularity while HERO remains as a strong counter.

The 1st and 2nd position are extremely close and it is hard to tell if Nekroz or HERO will pull ahead.

The current metagame is heavily shaped by decks that can easily perform Rank 4 Xyz Summon, as Cyber Dragon Infinity and Number S39: Utopia the Lightning are both extremely strong threats.

If the current trend continues, it is quite likely that Tellarknight would overtake Atlantean in the 3rd position.

Coming up next weekend on the 18th – 19th April 2015 is the Yu-Gi-Oh! Open Tournament – Singapore 2015. It would be interesting to see what players from the OCG Asia region has prepared for the very first premier-level tournament of this format.